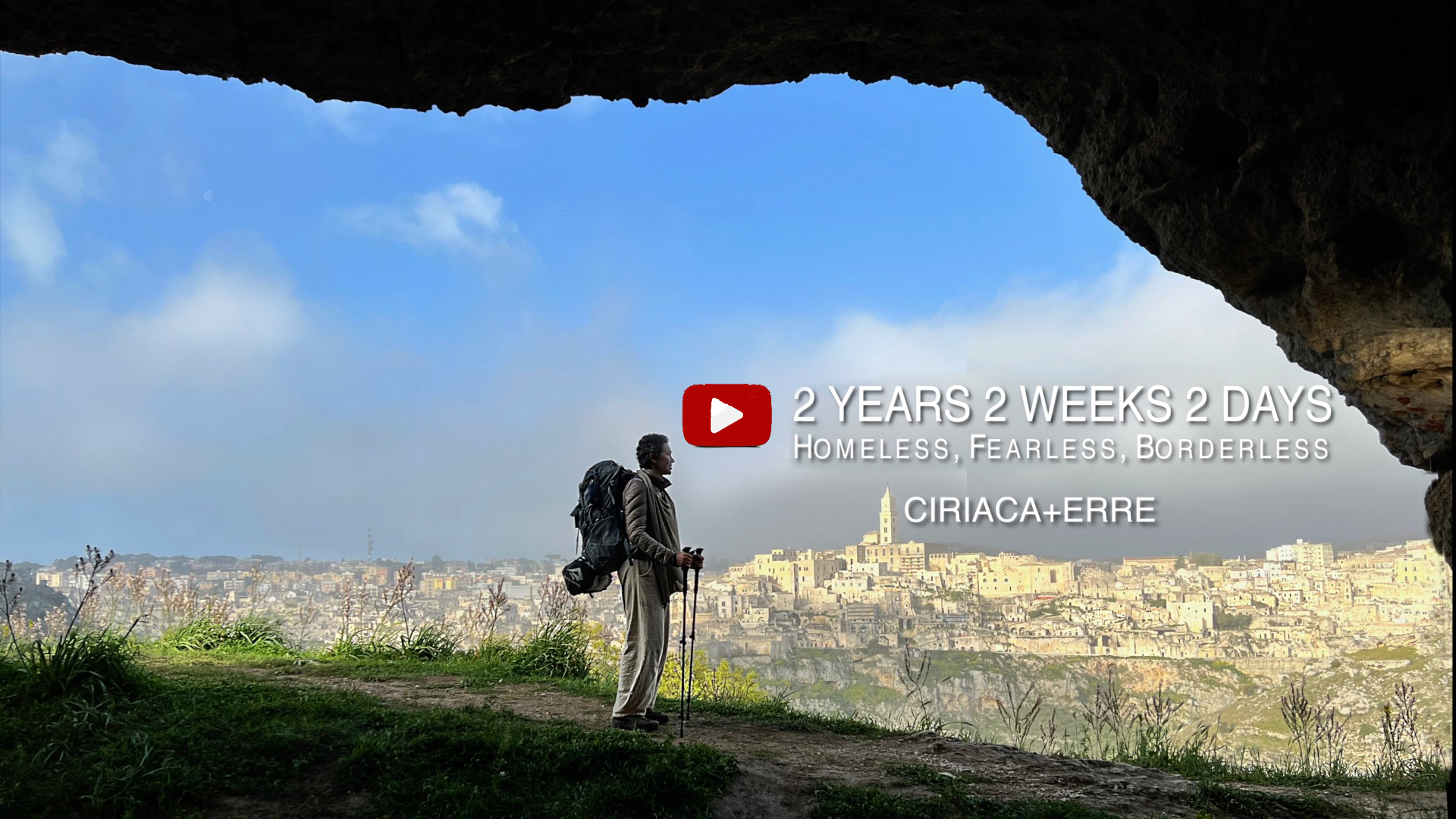 
On 22 April 2022, World Earth Day, the artist left everything behind to return to inhabit our planet, our true home, creating her longest performance lasting 2 years, 2 weeks and 2 days, embarking on a journey at the end of her physical and mental strength, as an artist, a woman and a mother, on a journey back through human history in search of humanity, utopia and a new way of living. 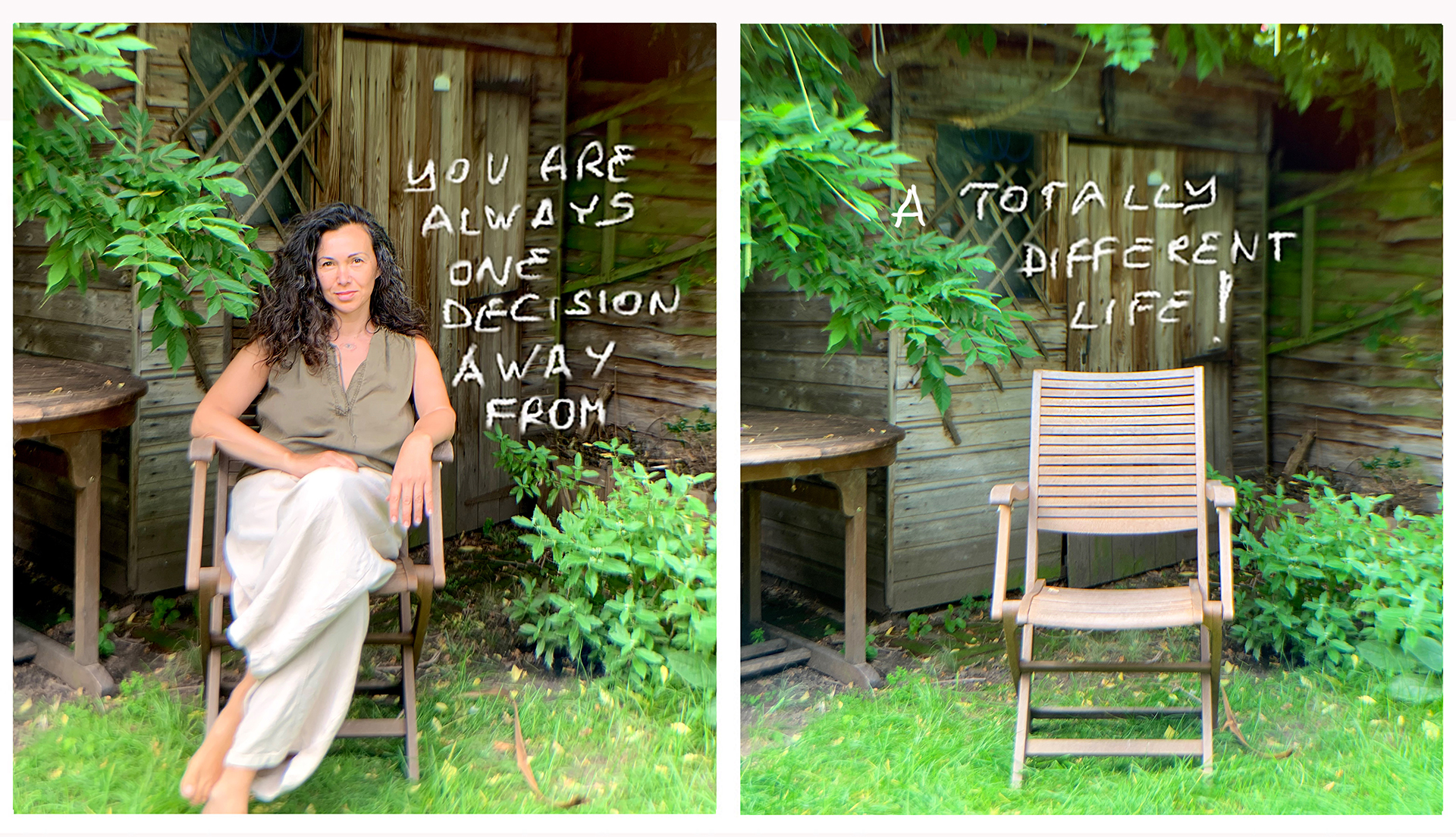 Her new performance, morally sponsored by the City of Matera, the Fondazione Matera Basilicata 2019 and Monte Verità in Ascona, sees her on a solitary journey as she crosses geographical, social and intimate boundaries, with the intention of elevating life itself to a work of art.

"In this journey of awareness, I felt it was important to set out experiencing a condition of extreme humility and lack of certainty, having nothing but my rucksack and my legs, and not knowing whether I will have somewhere to sleep and something to eat the next day.
This condition leads me to live completely in the present and to connect with other human beings and with mother Earth, reminding me of the impermanence of life,’ the artist says, ’and above all to rediscover the humanity’ that we risk losing."

Starting from the caves of her birth town , Matera, Ciriaca plans on travelling all the way to the African caves where Homo Sapiens survived the Ice Age, and from where we all come from. Migration is part of our evolution and Human Nature, as evidenced by the discovery of the DRD4 R7 gene, found in 20%of the population, also called the wanderlust gene. 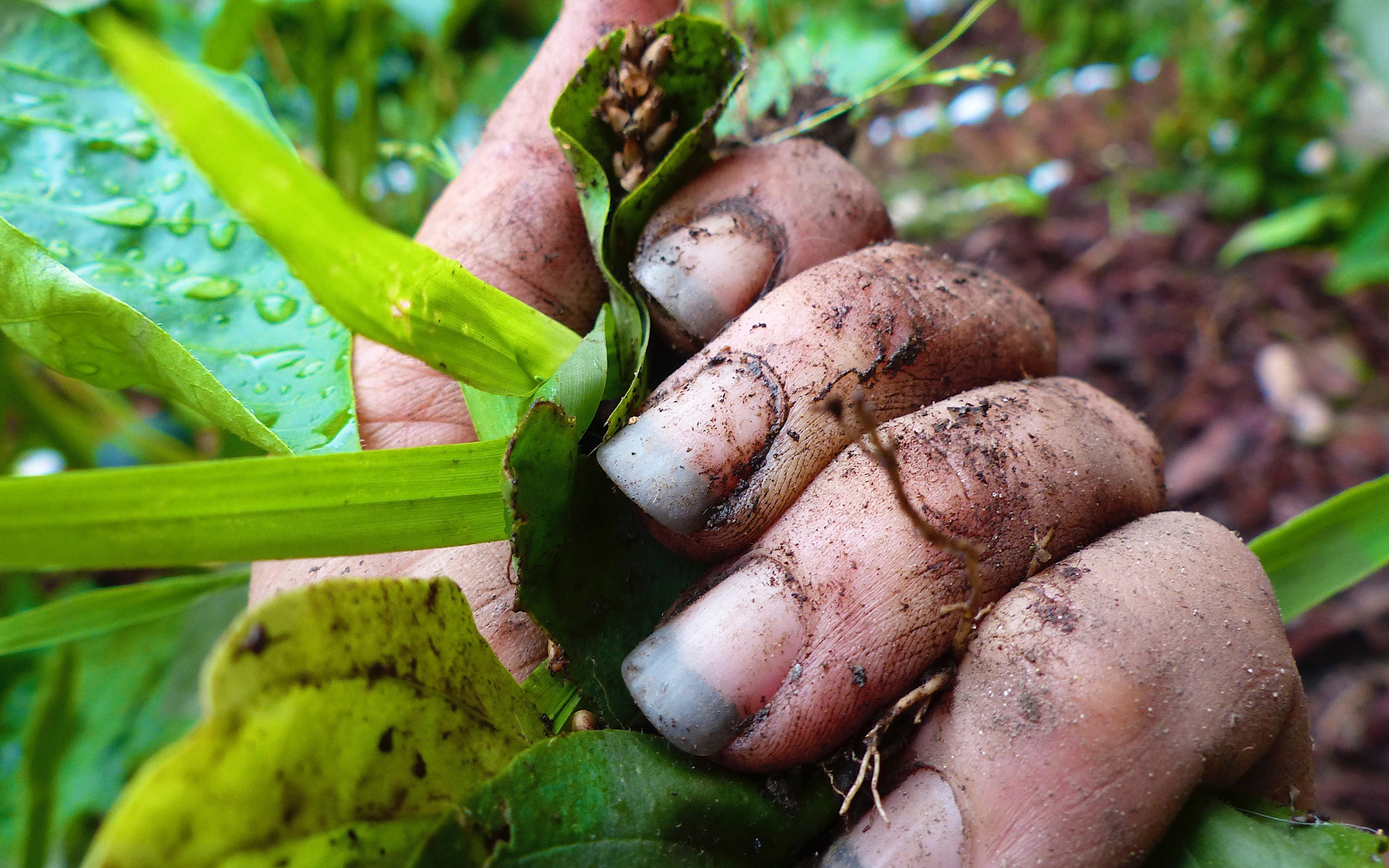 From Montagnola (CH) where the artist lived in the last few years, and where Herman Hesse lived too, she will travel all the way to India.

From the utopic and pioneering community of the early 1900s in Monte Verita’ of Ascona, Ciriaca will travel to find the more modern but equally utopic communities of ecologists an peace makers who yearn for new and more harmonic lifestyles. Nicoletta Mongini, Director of Cultures at Monte Verita’ Foundation, commented by saying: "all that happened in the last few years has highlighted how incredibly current is the history and background of Monte Verita’. Ciriaca’s project will explore it from several point of views".

The revisitation of the primordial essence in a practical matter rather then just philosophical, by being rather then thinking, demonstrates the immersive prospective of the artist who will dive in a life experience similar to the principals which originally inspired the founding of the community at the beginning of 1900s. Ciriaca will visit the last matriarchal society in China, where marriage doesn’t exist. From the peace pagoda in London she will march together with activist monks, and will finally reach the happiest town in Latin America, who abolished and abhorred the military. 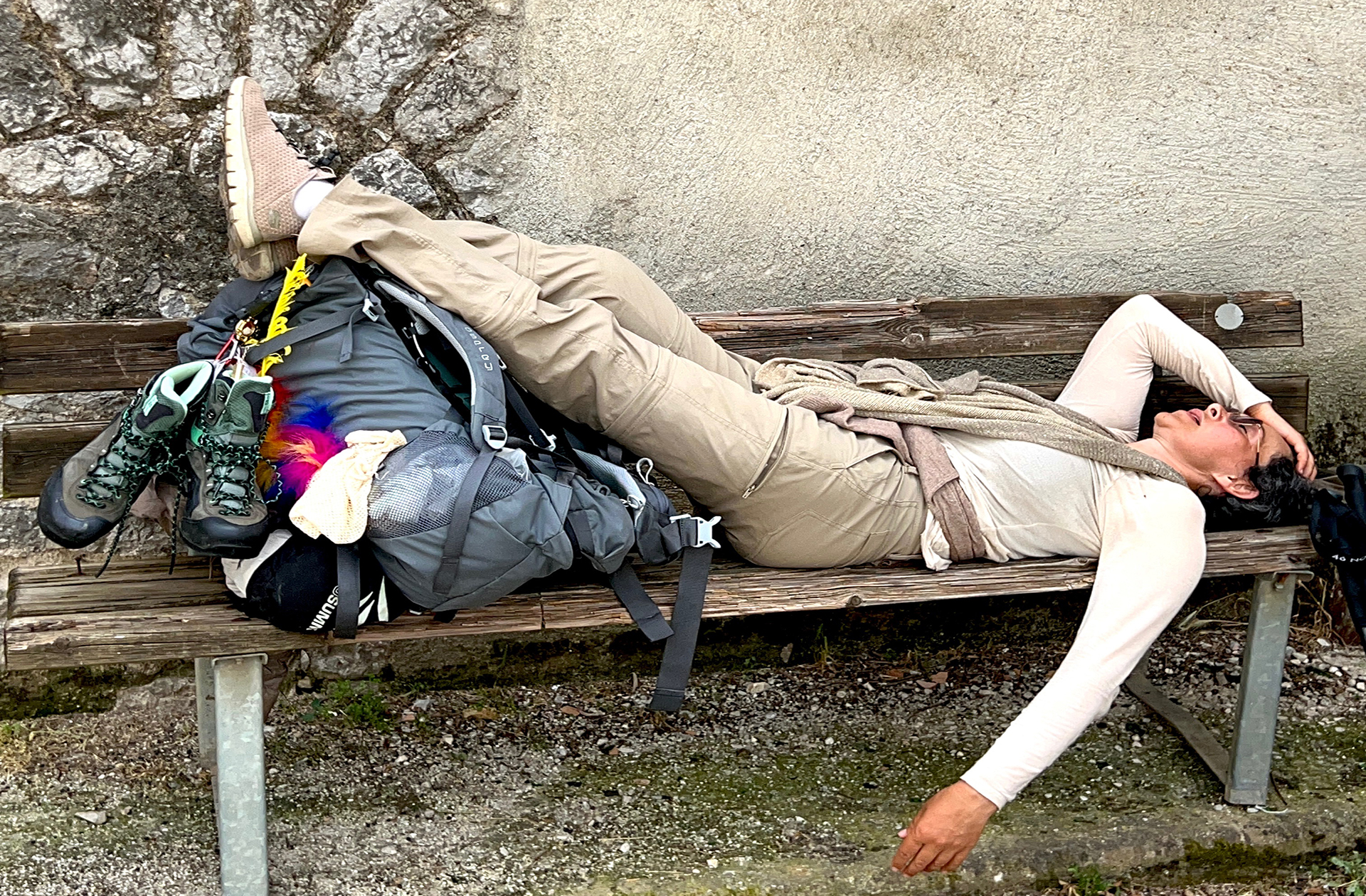 Ciriaca will mostly feed of raw vegetable and fruits and will experiment foraging, carrying only the basic essentials and a tent.

This project is connected to her previous work on "suspended identities", which is very deer to the artist and which she developed in her past performances such as I am free take a piece of me at the Museo della Permanente in Milan. This work highlighted the philosophical principal of voluntary simplicity which yearns for the essentials only and a return to Nature. It aimed to be a tribute to the figures that inspired Ciriaca, by searching in life and describing in their works freedom, the true essence of human beings in relation to Mother Earth. Among these Ippazia, Diogene, Darwin, Hermann Hesse, i filosofi Henry David Thoureau e Michel Foucault, Gandhi. The artist took inspiration for the lentgh of her performance from the period that Thoureau spent isolating in the American forests: 2 years, 2 weeks and 2 days. 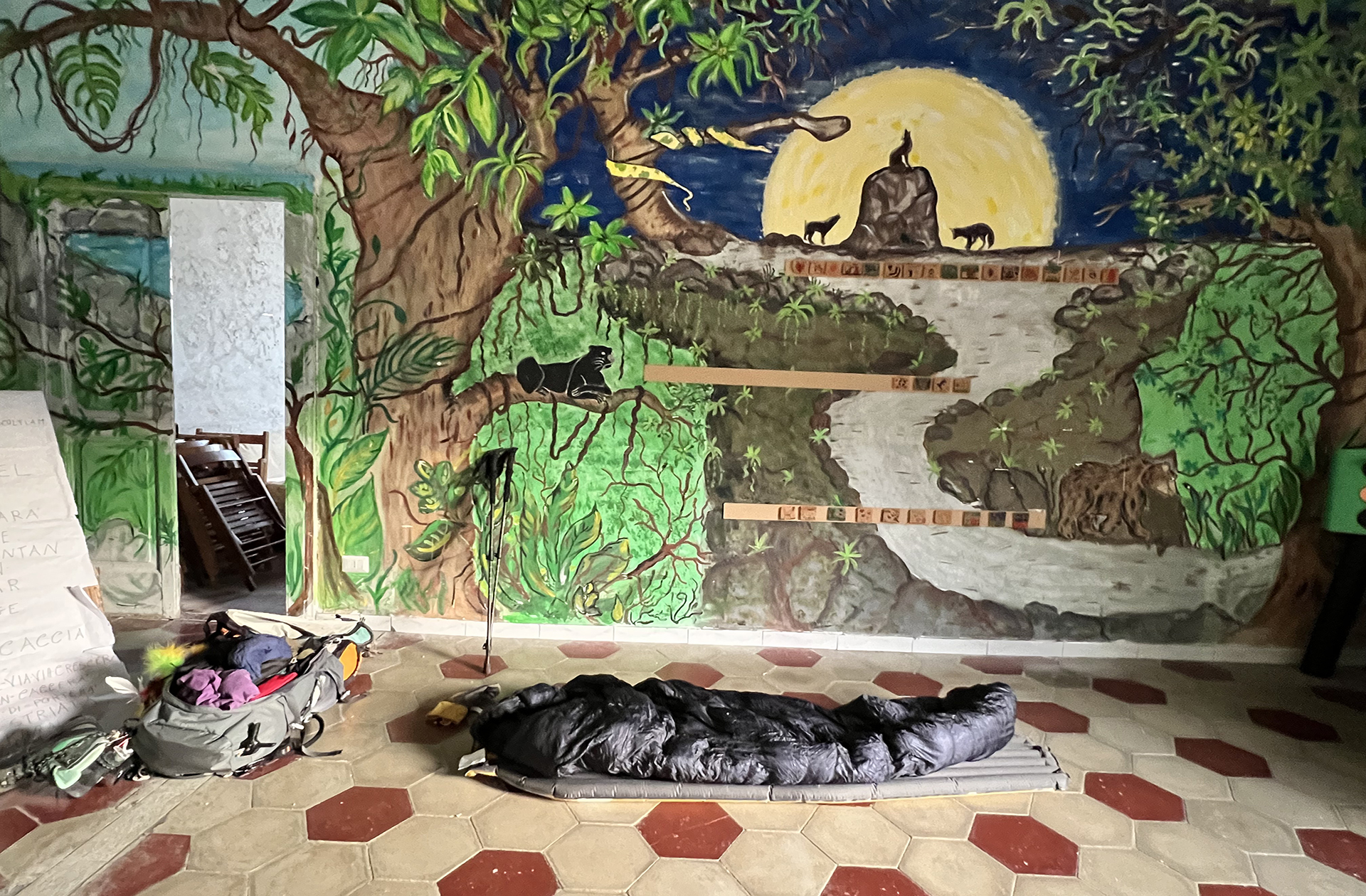 You can follow Ciriaca+Erre’s performance on her Instagram account @ciriacaerre from which she will take us on this extraordinar journey.
Please support me on ☞ GOFUNDME